Loneliness of the long distance runner 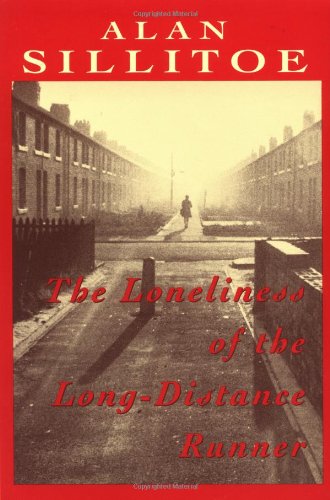 "The Loneliness of the Long-Distance Runner" by Alan Sillitoe, is a first-person monologue, spoken by a 17-year-old inmate of an English Borstal, or reform school. Smith, the only name this character receives, has been imprisoned for the break-in of a local bakery and received a two-year sentence, but he has discovered a way to improve the conditions of his stay in jail. The warden of the reformatory has his heart set on the winning of the Borstal Blue Ribbon Prize Cup for Long-Distance Cross-Country Running (All England), and Smith, the fastest runner in the institution, needs to do nothing but train for the race. He can trade his daily chores for the mitigated freedom of early morning runs in the countryside around the reformatory.

Yet things are not quite as simple as they seem, and the nature of the monologue, crude and colloquial in language and tone, underlines the tremendous class distinction between what the narrator Smith terms the "in-laws" and the "out-laws." In-laws, like the warden and his cronies, speak Oxford English and support and perpetuate the system, while the residents of the Borstal are denizens of the working class who have nothing to lose. It might seem that Smith would have little choice or desire not to play along with the powers that be, but during his stay in prison he has developed his own personal and idiosyncratic sense of morality. For him, to win the race would be tacitly to accept the premises of a self-serving establishment, and his own sense of defiance and self-worth can only be maintained by his individual conception of honesty. As he says, "It's a good life, I'm saying to myself, if you don't give in to coppers and Borstal-bosses and the rest of them bastard faced in-laws."

While it might appear that Sillitoe is simply delineating a social and economic struggle between the classes in postwar England, in a short story that was first published in 1959, the situation is much more complicated. In Smith's world, there is no such thing as solidarity and brotherhood among the underclass. In a series of flashbacks that illuminate his early life and the robbery that got him into his immediate trouble, we find that he has always been alone. Smith and his pal Mike are clever enough to hide their loot so that the police will not catch on to two teenagers who have suddenly become relatively wealthy, but the boys are even more wary of their own neighbors who will turn them in out of spite and jealousy. Loyalty is something that simply does not exist in this circumstance, and trust is a silly idea for fools. In the end, one can only be true to one's self, a self that can make mistakes but will never let you down. Loneliness becomes a natural condition; as Smith says, "I knew what the loneliness of the long-distance runner running across country felt like, realizing that as far as I was concerned this feeling was the only honesty and realness there was in the world."

Smith's own experience bears out his conclusions, especially in his family life, where his father died horribly of stomach cancer after a lifetime of slaving away in a factory and his mother was constantly unfaithful to her husband while he lived. The death benefit of five hundred pounds is quickly spent on clothes, cream cakes, a television set, and a new mattress for his mother and her "fancyman," and things are immediately back where they began. Thievery is all that the boy knows, and even the army can provide no outlet. As far as Smith is concerned, patriotism is another false idea concocted by the government to protect its own advantage, and life in the army is little different from life in prison. At least, in declaring himself a robber and an outlaw, Smith is overtly acknowledging the state of warfare that exists between people like him and the people in power, landowners and politicians who look like fish gasping for breath when the sound is suddenly turned down in the middle of their speeches on the television set.

Powerless as he may be in an England that views him as only another cog in the economic machine that grinds out more comfort for the rich, Smith seizes on the moment to shake his fist in the faces of the in-laws as he turns toward home in the Borstal race. Though he is far ahead of his nearest competitor, he slows down and then stops before the finish line, allowing his rival enough time to catch up and to win the race. Smith's gesture is meaningless to everyone but himself. "The governor at Borstal proved me right; he didn't respect my honesty at all; not that I expected him to, or tried to explain it to him, but if he's supposed to be educated then he should have more or less twigged it." But, if nothing else, the long-distance runner has remained true to himself, has not been duped into believing the false promises that would only enslave him even further. There is virtually no hope of social change in the bleak universe that Sillitoe has created, but there remains a kind of comfort in the affirmation of the individual human spirit that will not be broken down. If truth and honesty can exist anywhere, Sillitoe asserts, they survive in one's ability to look squarely at one's self in the face of all the odds. Paradoxically, honesty may reside in recognizing and accepting the dishonesty of contemporary existence.