The Loneliness of the Long Distance Runner (film) 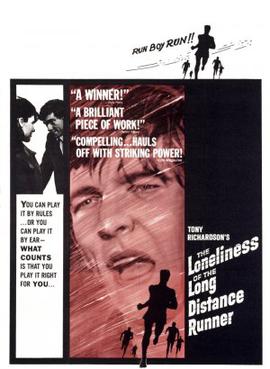 The film opens with Colin Smith (Tom Courtenay) running, alone, along a bleak country road somewhere in rural England. In a brief voiceover, Colin tells us that running is the way his family has always coped with the world's troubles, but that in the end, the runner is always alone and cut off from spectators, left to deal with life on his own.

Colin is then shown with a group of other young men, all handcuffed. They are being taken to Ruxton Towers, a detention centre for juvenile offenders, an approved school. It is overseen by the Governor (Michael Redgrave), who believes that the hard work and discipline imposed on his charges will ultimately make them useful members of society. Colin, sullen and rebellious, immediately catches his eye as a test of his beliefs.

The boys live in a series of Nissen huts with no privacy.

An important part of the Governor's rehabilitation programme is athletics, and he soon notices that Colin is a talented runner, easily able to outrun Ruxton's reigning long-distance runner. The Governor was once a runner himself, and he is especially keen on Colin's abilities because, for the first time, his charges have been invited to compete in a five-mile cross-country run against Ranley, a nearby public school with privileged pupils from upper-class families. The Governor sees the invitation as an important way to demonstrate the success of his rehabilitation programme.

The Governor takes Colin under his wing, offering him outdoor gardening work and eventually the freedom of practice runs outside Ruxton's barbed-wire fences. This is shown interspersed with a series of flashbacks showing how Colin came to be incarcerated, beginning with one showing his family's difficult, poverty-stricken life in a lower-class district of industrial Nottingham, where they live in a prefab. The jobless Colin indulges in petty crime in the company of his best friend, Mike (James Bolam). Meanwhile, at home, his father's long years of toil in a local factory have resulted in a terminal illness for which he refuses treatment and dies, leaving Colin as the family's jobless breadwinner.

Colin rebels by refusing a job offered to him at his father's factory. The company has paid a paltry £500 in insurance money, and he watches with disdain as his mother (Avis Bunnage) spends what Colin considers an offensive sum. Colin symbolically burns some of his portion of the insurance money and uses the rest to treat Mike and two girls they meet to an outing in Skegness, where Colin confesses to his date, Audrey (Topsy Jane) that she is the first woman he's ever had sex with.

His mother moves her lover, whom Colin resents, into the house; an argument ensues, and she tells Colin to leave until he can bring home some money. He and Mike take to the streets, and they spot an open window at the back of a bakery. There is nothing worth stealing except the cashbox, which contains about £70 (equivalent to £1,500 in 2019). Mike is all for another outing to Skegness with the girls, but Colin is more cautious and hides the money in a drainpipe outside his house. Soon the police call, accusing Colin of the robbery. He tells the surly detective (Dervis Ward) he knows nothing about it. The detective produces a search warrant on a subsequent visit, but finds nothing. Finally, frustrated and angry, he returns to say he'll be watching Colin. As the two stand at Colin's front door in the rain, the torrent of water pouring down the drainpipe dislodges the money, which washes out around Colin's feet.

This backstory is interspersed in flashbacks with Colin's present-time experiences at Ruxton Towers, where he must contend with the jealousy of his fellow inmates over the favouritism shown to him by the Governor—especially when the Governor decides not to discipline Colin, as he does the others, for rioting in the dining hall over Ruxton's poor food. Colin also witnesses the kind of treatment given to his fellows who are not so fortunate: beatings, bread-and-water diets, demeaning work in the machine shop or the kitchen.

Finally, the day of the five-mile race against Ranley arrives, and Colin quickly identifies Ranley's star runner, Gunthorpe (James Fox). The proud Governor looks on as the starting gun is fired. In the final mile Colin overtakes Gunthorpe while running through the woods and then gains a comfortable lead with a sure win, but a series of jarring images run through his mind: jumpcut flashes of his life at home and his mother's neglect; his father's dead body; stern lectures from detectives, police, the Governor and Audrey. Just yards from the finish line, he stops running and remains in place, despite the calls, howls and protests from the Ruxton Towers crowd. In close-up, Colin looks directly at the governor with a defiant smile, an expression that remains as the Ranley runner passes the finish line to victory. The Governor is clearly disappointed.

At the end, Colin is back in the Borstal's machine shop, now ignored by the Governor.